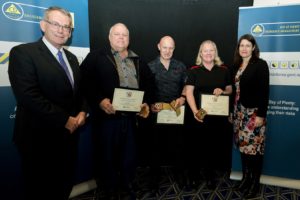 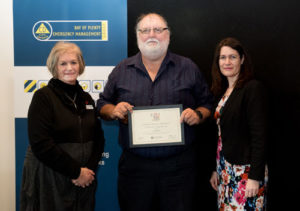 The Eastern Bay was well represented when 19 of the region’s Civil Defence and Emergency Management responders and staff were recognised on Friday.

Ministry of Civil Defence and Emergency Management Director Sarah Stuart-Black presented the recipients with their long service awards, with some people being recognised for more than 30 years of work in the sector.

Chair of the Bay of Plenty CDEM Group Joint Committee, Tauranga Mayor Greg Brownless, said it was an honour to be able to recognise the years of service.

“Whether they have responded locally or nationally, given their time voluntarily or even if they are part of the engine room making sure our communities are able to get through a disaster, what they have done is remarkable.

Geoff Brown, NZ Response Team 17, 10 years
Geoff has been an active team member of the New Zealand Response Team (NZRT 17) for 11 years, in this time he has assisted in the Police with numerous recoveries and has attended many weather related events in the Eastern Bay. Geoff was also deployed to Christchurch during the 2011 earthquake.

Cliff Stewart, NZ Response Team 17, 10 years
Cliff joined in 2006 and now is in his 11 year as a Rescue Volunteer, he is actively involved with both New Zealand Response Team (NZRT 17), which has seen him deployed twice to Christchurch to assist in the aftermath of the earthquake. He has also assisted Police with recoveries and responded to many weather related events in the Eastern Bay.

Aubrey Dalton, NZ Response Team 17, 10 years
Aubrey is in his 11 year of service as a rescue volunteer and has completed all the required training and Civil Defence unit standards and despite his age there is no slowing him down, Aubrey continues to forge on and plays an important support role for the team. Over the years Aubrey has attended many of the weather related events in the Eastern Bay even responding to his own flooded property. Aubrey is an active member of the New Zealand Response Team (NZRT 17).

Jamie Rhodes, NZ Response Team 17, 20 years
Jamie is currently in his 21st year as a Rescue Volunteer, as well as the two deployments to Christchurch during the 2011 Earthquake, Jamie has assisted Police with numerous recoveries and attended many weather events in the Eastern Bay of Plenty flood events. Jamie also volunteers his time to a number of other agencies Whakatāne Rural Fire, LANDSAR, Kiwi Halo Trust. Jamie is a trusted member of New Zealand Response Team 17.

Brenda Davis, NZ Response Team 17, 20 years
Brenda joined as a Rescue Volunteer in 1996 and is currently in her 21st year of service. Brenda is the teams longest serving female with an excellent attendance record and has been involved in most if not all of the local events. In addition to assisting the Police with numerous recoveries over the years, Brenda was also deployed to assist in 2011 Christchurch earthquake and the RENA clean-up.

Tony Gillard, NZ Response Team 17, 20 years
Tony joined the Whakatāne District Council Civil Defence Team in 1989 as a volunteer and is now in his 28th year. Tony was appointed Rescue Manager in 2004 and is still currently the Team Manager. Tony has been deployed to all natural disasters in the Eastern Bay of Plenty since 1989, and assisted Police with numerous recoveries over the years. Tony was deployed twice in 2011 to Christchurch to assist with the Earthquake.  Tony was also awarded the Emergency Management Academy of New Zealand Chief Executives Award for Excellence in 2007.

Alan Keeber, NZ Response Team 17, 20 & 30 years
Alan has currently served 31 years as a rescue volunteer and today is being recognised for his 20 year and 30 year long service award. Alan is a respected Team Leader of the New Zealand Response Team 17 holding this role for 9 years. Alan has deployed twice to Christchurch during the 2011 earthquake and assisted with the RENA clean-up. Alan has led and assisted Police with numerous recoveries. Alan most memorable and challenging moment over the last 10 years was being in charge of the New Zealand Response Team’s Emergency Operations Centre during the Christchurch Earthquake.