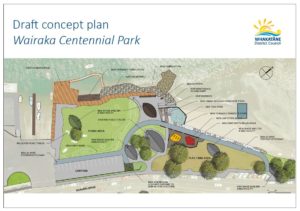 Work on the river-edge components of the Wairaka Centennial Park development in Whakatāne will begin next week.

A contract for the construction of the Park’s swimming area, a tidal pool for younger children, access steps to both areas and terraced steps along the beachfront to the east of the tidal pool has been let to local business Tracks Concrete. Tracks’ staff will take over the site on Monday, which will see safety fencing installed around the immediate work area, including the eight riverbank parking spaces adjacent to the playground and public conveniences.

Whakatāne District Deputy Mayor Judy Turner says the work will be undertaken in two stages and is expected to be completed before the end of April.

“This part of the redevelopment project includes some of the key construction elements for this new, family-focused community facility,” she says. “Once these are completed, we will move on to the construction of the shaded barbecue area, a major upgrade of the playground, including a zero-depth water feature, and the other landscaping features which will transform the area into an outstanding attraction for locals and visitors alike.”

Mrs Turner says the $870,000 project should be ready for use by July. “Some 30 percent of the cost of the development has been provided by community funding agencies, including a $115,000 contribution by the Eastern Bay Energy Trust.  It’s absolutely fantastic to have that sort of support, because it makes it affordable for our community to undertake some key developments which will contribute to an even-better Eastern Bay lifestyle.”

Other contributions have been provided by the Lion Foundation ($70,000), the Southern Trust ($50,000), the former Whakatāne Community Board ($20,000) and Whakatāne Jaycees ($15,000). ‘In-kind’ contributions have also come from Te Rūnanga o Ngāti Awa and the Bay of Plenty Reginal Council. The balance of the project cost will come from Harbour Fund reserves and playground renewal reserves.

The Council has asked that people utilising the playground and public conveniences stay well away from the construction zone, including the vehicle accessway to the closed-off riverbank parking area.