Whakatane turns it on for Oxfam 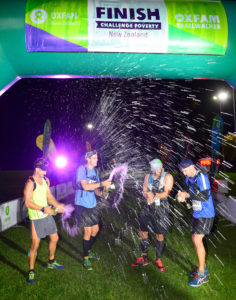 Whakatāne turned on a warm welcome for Oxfam Trailwalker 2017, with organisers saying the event was a huge success. More than 200 teams took up the challenge this year and though there were some scattered showers on Sunday afternoon the weather proved to be far more cooperative than last year. To date the event has raised $783,000 to help reduce poverty in the Pacific, and this figure is expected to rise to around $850,000 when donations close on 1 May.

In addition to many local teams, there were numerous groups from throughout New Zealand as well as entrants from Australia, the US, Hong Kong, Singapore, Japan and Columbia. Deputy Mayor Judy Turner, whose team 2 Inspired 2B Tired completed the 50km course in 14 hours, says it was great to see the District get behind the event. “The encouragement of everyone along the way was just fantastic,” she says, “people tooted and waved, got dressed up in costume and took to the streets to cheer the walkers on – we even had someone offering to cool us down with a garden hose! It really was a fabulous Whakatāne welcome – we did ourselves proud.”

Amanda Wright, Event Manager at Oxfam New Zealand, says her team is delighted with how the event went and was quick to praise locals for their support. “We’ve had amazing feedback from our Trailwalkers about what an incredible experience it was and what warmth and support they got along the way from residents and those at the checkpoints,” she says. “Teams commented on the great hospitality – things like kids running with them along the beach, messages of encouragement written in the sand, and signs welcoming them in front yards – and it is this kind of community involvement that really makes for an amazing journey. We’d like to thank all the Trailwalkers and volunteers for their efforts, and our sponsors, Whakatāne District Council, and the people of Whakatāne for making it such a huge success – we are already looking forward to next year!”

Nicola Burgess, Events and Tourism Advisor at Whakatāne District Council, says feedback around the event has been resoundingly positive. “For many of the participants it was their first visit to Whakatāne, so it was great that they saw it when the District was putting on such a show. Events like this are a fantastic way to showcase our community, but they also have real benefits; last year’s Oxfam Trailwalker had around $1.9 million of economic impact, so in addition to raising money for a great cause the event also benefits Whakatāne.”