Whakatane man and dog team the best in two countries 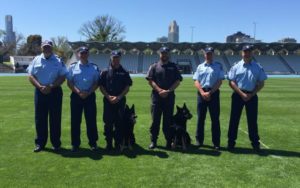 Dave and Isaac also took out the top tracking award while Owen and Quid won the top searching award.

Together their results meant that New Zealand Police retained the team trophy.

Some of the officers will return to New Zealand later today (Sunday 30 October) but the three dogs will have another few days in Melbourne for standard vet checks before they fly home and return to operational duties.