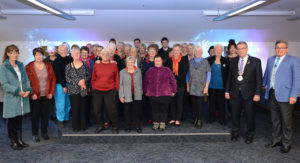 Whakatāne District Council volunteers were honoured in a ceremony held at the Civic Centre on Tuesday 8 August 2017. The ceremony was led by Mayor Tony Bonne, Deputy Mayor Judy Turner and Councillor Andrew Isles, and formally recognised a variety of volunteer groups who are active throughout the Whakatāne District.

In his opening remarks, the Mayor thanked all those present and all those involved in the volunteer groups, which he says play an essential role in the community and contribute hugely to the District.

“Today we have representatives from our libraries, a range of care groups, as well as the museum and gallery,” the Mayor said, “and I want to thank you all for assisting our organisation to enhance and restore our natural environment, engage with the community and deliver the services it needs. Thank you for making our District a better place – I am humbled by the sheer amount of time that many of you contribute, not only for the Council, but also for a range of other local organisations.”