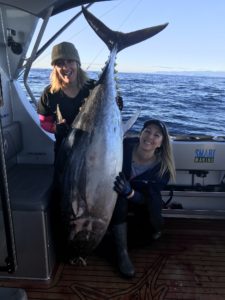 Nicky Sinden, host of ADOS Addicted to Fishing, and Helen Horrocks with a southern bluefin tuna caught at Waihau Bay. Watch it unfold on Prime TV, 5pm, Saturday 20 October.
Most game fishermen in New Zealand are used to putting their gear away for winter, only to bring it out again in time for the summer run of marlin. But there’s a previously little-known winter sport fishery that’s quickly developing into a major attraction, bringing hundreds of keen fishermen and women to the tiny East Cape settlement of Waihau Bay in June and July each year.
The annual run of southern bluefin tuna is rapidly growing in popularity as a sport fishery, resulting in a mid-winter tourism boost for Waihau Bay, with anglers coming in their hundreds from around New Zealand. The remote region is set to get an even bigger boost too, with a forthcoming TV show shining the spotlight on this emerging recreational fishery.
ADOS Addicted to Fishing with Nicky Sinden, Australasia’s only fishing show hosted solely by a female, will showcase the winter southern bluefin tuna fishery at Waihau Bay in an episode airing on Prime TV on Saturday 20 October, at 5pm. On the days the show was filmed, as many as 200 boats used the Waihau Bay Sport Fishing Club ramp to launch.
Scott McNulty, a committee member at Waihau Bay Sport Fishing Club, says this number was unheard of in the middle of winter until just two years ago. “It would normally be quiet at that time of year”, he says, “so it’s been a bit of a surprise to everyone to suddenly have all these boats and people turning up from all over.”
Scott, whose mother previously owned Oceanside Apartments in Waihau Bay, says the ‘tuna rush’ provides a boost to the region at a time when visitor numbers would otherwise be very low. “Normally we wouldn’t have many bookings in June or July”, he says, “but for the last couple of years the town has filled up completely – there’s literally no beds left on weekends when the weather is good. It’s great for the local store and lodge.”
Although the tuna have always been there, Scott says in 2017 a combination of events caused a ‘tuna rush’. “Commercial fishermen shared coordinates on social media, and the tuna were closer to shore than usual,” he says. “The weather was favourable too, and it’s normally a hostile ocean environment. But this year was completely different and there was only a short run, so we’ll wait and see what happens next year”.
The emergence of a winter game fishery at Waihau Bay has also made headlines in Australian fishing publications, making it likely that this will soon become an international tourism attraction, as well as a domestic one.
Southern bluefin tuna are highly prized for their sashimi-grade flesh, and can grow to 150kgs or more, making them a sought-after sport fish too.