Truckies taking too much time on detour 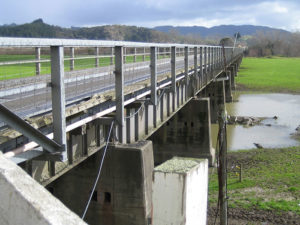 The Whakatāne District Council has delegated authority to Chief Executive Marty Grenfell to consider exemptions which would allow heavy traffic to travel through Ōhope, under tightly controlled conditions, while the Pekatahi Bridge remains closed.

The Council’s Traffic and Speed Bylaw requires heavy traffic to use the State Highway network under most circumstances, but the three-month maintenance closure of the bridge has seen east-west traffic on SH2 rerouted through Whakatāne.

While that has had a minimal effect on traffic travelling between Tauranga and Ōpōtiki, logging trucks which normally complete two round trips each day between East Cape forests and Kawerau have faced an additional daily travel time of around one hour, putting their drivers at risk of exceeding the maximum legal operating time of 12 hours/day.

An affected transport company has indicated it would seek permission for the one truck it has using this route to make its unloaded return journey through Ōhope, rather than returning to SH2 at Tāneatua.

At yesterday’s Council meeting, elected members also considered related information from the Ōpōtiki District Council, expressing concerns about the impact of the bylaw on some transport companies. A resolution was passed to allow the Chief Executive to approve exemptions during the bridge closure period, provided that:

Information provided to the Council indicated that maximum of 10-12 vehicles a day may qualify for an exemption.