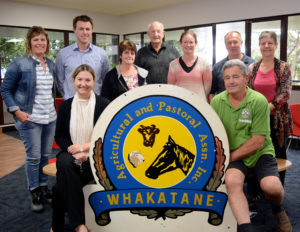 The Whakatāne A&P Show opens tomorrow and organisers are promising something for everyone, with a host of attractions both on the field and off.

President of the Association Andrew Isles says that this year, in addition to the horse events and petting zoos out on the field, there will be plenty to see and do inside the War Memorial Hall complex.

“We are bringing some Show life back inside, with live music – including Rock n’ Roll and the ukelele orchestra – and 26 stall holders,” he says, “in addition to the trade exhibitors and things like the apple pie competition. The Home and Industry competitions are also back, and this year we have Cow Pat Bingo, though obviously that one will not be indoors!”

The A&P Show was first held in 1908 in Tāneatua and became a regular and popular fixture on the District’s calendar before moving to Whakatāne in the 1930s. It remained popular for many years, helping to bring town and country together, but in 2009 it was cancelled as organisers struggled to gain support.

With new blood on board the Show returned in 2015 however, and Mr Iles says the Association is looking firmly to the future.

“We have a new committee but with some familiar faces like our patron Don Herdman, who has a long connection with the Association as well as the town, having served as Mayor. We also have a new logo and a new sense of mission to rejuvenate what was a regular spectacle in Whakatāne. We’d like to thank all our sponsors and exhibitors – and urge everyone in the District to come along; it is just a gold coin donation for a great day out.”

The Whakatāne A&P Show is on from 7-8 October at Rex Morpeth Park; for more information, visit: whakatane.com/events/whakatane-ap-show