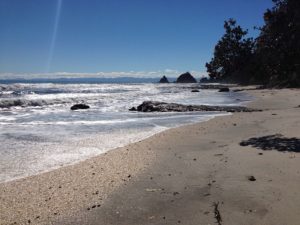 The section of the Ngā Tapuwae o Toi Walkway between Ōtarawairere and West End, Ōhope has been closed for safety reasons.

A slip resulting from the weekend’s significant rain event has covered the track and made it unsafe for walkers. Whakatāne District Council staff and contractors are working at the slip site, but at this stage, it’s not known how long it will take to restore safe access.

Council Open Spaces Coordinator Ian Molony says that in the meantime, the Ōhope-Ōtarawairere track will be closed to the public, until further notice. “Barriers are in place to keep people away from the hazardous area and we’re asking people not to try and find their own way past the slip,” he says.  “We’ll get an assessment of the damage done as quickly as possible and updates will be posted on the Council website and Facebook page to advise when the track will reopen.”

Until the track reopens, people wanting to walk Ngā Tapuwae o Toi will need to use the track from the Bay up to the Otarawairere housing area and then access Ōhope via Ōtarawairere Road and Ōhope Road.