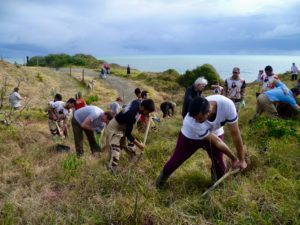 This Sunday will see another planting day on the Dunes Trail of Motu Trails. Everyone is invited to join in and help restore the coastal environment.

The planting day will be the second of three on the Dunes Trail this winter, starting at 9.30am and followed by refreshments. Access will be from Hukuwai beach carpark, 3km east of Opotiki on SH35.

A third planting day will follow on Sunday 13 August, by which time 2600 plants will have been bedded in this winter.

Taking part in this Sunday’s planting day will give good opportunity to check out the new Dunes Trail bridges at Hukuwai beach. The walking/cycling bridges are the third in a series of 2017 enhancements that were supported by The New Zealand Cycle Trail.

The other enhancements were extensive trail resurfacing on the Opotiki end of the trail, completed two months ago, and a 40m stretch of concrete near Pakowhai ki Otutaopuku bridge, where the trail is designed to be submerged whenever the Otara river floods.

If you’re joining the planting day, please wear covered footwear and bring a spade. In case of bad weather on Sunday, check facebook.com/motutrails