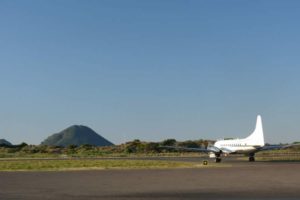 The extension to the western ‘runway end safety area’ at Whakatāne Airport has been delayed, following the discovery of several shell ‘middens’ by the earthworks contractor.

The presence of shell deposits in the work area triggered the ‘accidental discovery protocol’ included in the resource consent for the project, and set out in arrangements for Ngāi Taiwhakaea (the hapū with mana whenua over the airport area) to provide cultural monitoring and advice, should any cultural finds be unearthed.

As a result of the discovery, work at the western end of the runway has ceased and an archaeologist has been engaged to manage and investigate the site and lodge an application with Heritage NZ for the Archaelogical Authority required before further work can proceed. The authority could take six to eight weeks to reach a decision.

In the meantime, work to complete the eastern runway end safety area (RESA) extension has resumed and work on the access road to the western end of the runway and adjacent grazing blocks will also continue.

The flat and grassed, 240 metre-long runway end safety areas (extended from the previous 90-metres) were required by new Civil Aviation regulations and will allow Air Chathams to utilise its larger SAAB 340 aircraft for peak-demand, scheduled services to and from Auckland. The project was initially expected to be completed by the end of October, but a January 2019 timeframe is now considered likely.
[/et_pb_text]
[/et_pb_column]
[/et_pb_row]
[/et_pb_section]