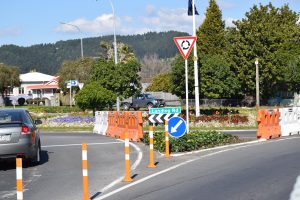 A successful traffic flow trial at the Landing Road bridge roundabout, which will come to an end this Friday, has demonstrated significant benefits for traffic entering the Whakatāne urban area from SH30.

The six-week trial was implemented jointly by the NZ Transport Agency (NZTA) and the Whakatāne District Council to evaluate whether peak travel time congestion issues at The Hub could be addressed by reconfiguring the bridge roundabout to provide right-of-way for eastbound traffic.

That work was motivated by NZTA’s planned three-month maintenance closure of the Peketahi Bridge on SH2 from mid-February next year, which will see an extra 2000 vehicles per day routed through Whakatāne, exacerbating the existing traffic congestion issues.

A report by Beca Consultants indicates that the roundabout reconfiguration achieved an average travel time saving of between three and five minutes per vehicle entering Whakatāne during the peak morning commute period, and lesser savings for both east- and westbound traffic at other times of the day.

Council Infrastructure General Manager, Tomasz Krawczyk, says the cumulative travel time saving for the 1100 eastbound vehicles using the bridge during the peak commute period was in the order of 50-55 hours a day. “If that saving is converted to a financial benefit, it equates to a total of approximately $150,000 each year,” he says.

Benefits and ‘disbenefits’ of the trial were evaluated using continuous CCTV footage and traffic movement sensors on the routes into Whakatāne’s CBD.

This showed an extra two minutes in peak commute travel time for vehicles diverted across the bridge from the short western extension of Landing Road; and an additional one minute in travel time for the approximately 200 vehicles diverted from Hinemoa Street during the same period, or approximately five hours in total. Mr Krawczyk says the monetary value of the disbenefit equates to about $12,000 a year.

“The evaluation report recommended that the roundabout reconfiguration be left in place until the end of the Peketahi Bridge closure in May next year, but given Council’s commitment to a six-week trial period, and the limited opportunity for public consideration of a longer arrangement, the trial will conclude this week, as planned,” he says.

The roundabout reconfiguration will be reintroduced when the bridge across SH2 closes, to reduce the expected negative impacts on traffic congestion during the closure period. In the meantime, we’ll be working with NZTA to progress a business case which addresses the current congestion issues, the need for a second bridge, and the congestion at other key intersections in the Whakatāne urban area.”

Mr Krawczyk says the barriers at the Landing Road roundabout will be dismantled after Friday morning’s commute period and signage warning drivers of the changes involved will be put in place. He adds that formal community feedback on traffic congestion and potential solutions, including the possibility of continuing the tear-drop configuration for the roundabout beyond the Peketahi Bridge closure period, will be sought as part of the Council’s 2017/18 Annual Plan consultation process.