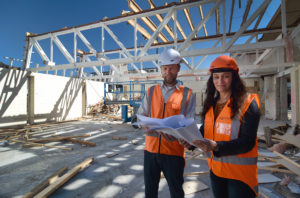 The redevelopment of the Whakatāne Museum and Research Centre in Boon Street is well underway, with piles for the new extension already in place and major work being carried out on the existing structure.

Flinn Clark, Contracts Manager at Watts and Hughes Ltd, says the project is progressing well and the public can already see the changes taking shape. “In the coming weeks we will be stripping top soil to prepare for the Centre’s new driveway,” he says, “and we have sunk test piles and will be putting in over 100 permanent piles in the coming weeks. These go down about eight metres to the bedrock. We have also removed all the existing timber framing from the building and will begin concrete cutting and structural improvements, like column infilling, shortly.”

Mr Clark says the company has been working closely with the Bay of Plenty Regional Council and has a remediation plan in place to ensure correct control of any contaminated soil that may be found, as it is believed the site had been used for industrial purposes in the past.

The project is expected to be completed in August 2018 and Whakatāne District Council Project Manager Paul Smith says the redevelopment will incorporate several unique features. “In addition to structural strengthening to bring the building up to current seismic codes and raising the floor level to guard against potential weather event impacts, the building will also feature full environmental control and a vapour barrier in critical spaces to provide the constant temperature and humidity levels needed to protect the collection.”