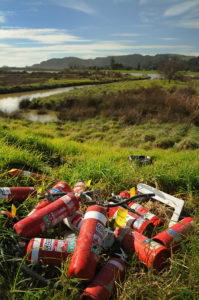 A series of recent fly-tipping incidents have left several piles of waste around Whakatāne and moved Whakatāne District Council’s Community Relations Manager Graeme Lewer to appeal to the public for help in combating it.

Mr Lewer says the recent spate of fly-tipping has gone far beyond the usual scale, with rubbish being dumped in Waimana, near a popular swimming spot, and off Keepa Road in Whakatāne. “The Keepa Road dumping is particularly troubling as this is not just household waste, but industrial waste,” Mr Lewer says. “The refuse dumped in that location includes around two dozen commercial fire extinguishers, all of which have clearly been decommissioned from commercial properties. Someone reading this will know where they came from, and we’d like to hear from them.”

Mr Lewer also urged the public to keep an eye out for fly-tipping, and though he warned people against approaching anyone involved in the act, he says taking registration numbers was one way to help identify those responsible. “If you see someone and you think they are fly tipping, take a note of the registration number and perhaps get a photo on your phone, then give us a call on 07 306 0500. This is not only unsightly and unsanitary, it is also dangerous and we will prosecute wherever possible. Fly-tippers can and will be fined up to $400, so it is much cheaper to do the right thing and take all waste to a Transfer Station.”