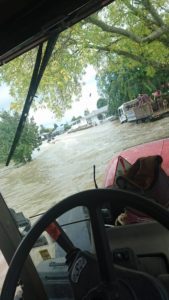 Flooding can happen without warning and when

we least expect it.  There are potential health risks associated with contaminated flood water such as the spread of gastroenteritis (diarrhoea and vomiting).   The information below should be useful to help protect the health of you and your family and whanau during and after a flood event.

Always assume that all flood water is potentially contaminated with farm run-off, faecal matter from feral and domestic animals, and sewage.  Children in particular must keep away from flood waters.

The best advice is to keep away from flood waters, use only a clean (i.e potable) water supply for drinking, cooking, and washing. Hand washing is always vitally important to help prevent the spread of disease.

Hands must be washed with soap and water after any contact with flood water, flooded property, after going to the toilet, and before preparing or eating any food.

If a ‘boil water’ notice is issued, then water needs to boiled before drinking.  This means that the water needs to be brought to a rolling boil for at least 1 minute before it becomes safe to drink.

There are potential health risks associated with contaminated flood water.  It can be assumed that all flood water is potentially contaminated with farm run-off, faecal matter from feral and domestic animals, and, in some cases, sewage.  Where a home, office, or retail premise has been affected by flood water above floor level, all soft furnishings will need to be effectively decontaminated or disposed of.  This includes carpets, curtains, furniture, and any other fittings.  In some cases thorough cleaning followed by exposure to sunlight will be sufficient, but some furnishings and fittings will have to be thrown out.  Each situation needs to be assessed individually.  Anything that is discarded should be dumped immediately rather than leaving it lying around for weeks.

If any food is affected by flood water, or fridges or freezers were left without power for more than a couple of hours, this food will need to be thrown out.  Any food premises will have to take extra care to ensure everything is decontaminated.

The sewage system is often affected in a flood.  Most small rural communities rely on septic tank systems for collecting, treating, and disposing of sewage.  The tank itself can be affected by flood waters, and its contents can find their way to the surface and mix in with the flood waters.  In larger towns and cities there is a network of sewer pipes connecting each building to a single sewage treatment plant.  Occasionally the network of pipes can be broken by flooding, or one or more of the pumps that are used to pump sewage through the pipes may fail.  When things go wrong with a sewage system this usually results in flood waters being contaminated.  Avoid contact with flood waters.  Children in particular must keep away from flood waters.

Any sports fields, parks, or gardens which have been flooded should not be used until 48 hours after all surface water has disappeared.  This time allows for the action of the fresh air, the wind, and sunlight to decontaminate most of the bugs that would have been left behind by the flooding.  Of course our environment is not sterile.  There are always bacteria, viruses, and other microbes all around us.  This is why we must always wash our hands after playing or working outside, and before cooking or eating.

Returning to Your Home After Flood-Damage

As a public health precaution, it is routinely recommended that people avoid swimming in rivers, streams and harbour areas for at least 48 hours after heavy rainfall events.

Shellfish beds are likely to be affected by contaminated flood water.  Because of the way most shellfish filter their food from the water in which they live they are likely to all carry higher than acceptable levels of microbes, including bacteria and viruses, for some time.  Click here for more information on shellfish.

Anyone experiencing any illness should consult their family doctor as usual or Healthline on 0800 611 116. 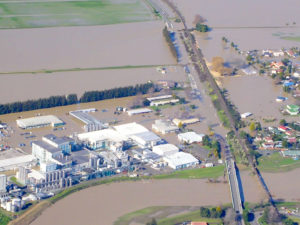