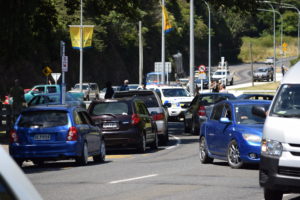 Police have this afternoon been closely monitoring a large group of gang members travelling between Kawerau and Whakatane in a funeral procession.

A motorcade of more than 100 cars carrying Mongrel Mob members left a Tangi at Kawerau at around 1pm today and travelled through Taneatua on the way to Whakatane.

Approximately 15 Police officers, as well as Armed Offenders Squad staff from Tauranga and Rotorua, have been involved in monitoring the procession.

At around 4:15pm shots were fired near the corner of Valley and Arawa Roads.

Police have since arrested several people and enquiries are continuing.

The procession has now reached its destination at Hillcrest Crematorium and Police has closed the entrance and will prevent anyone else from entering.

Police will once again closely monitor the situation when the motorcade leaves the crematorium.

At this stage that is all the information available.