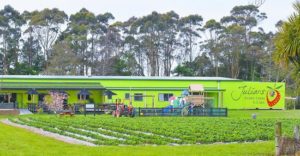 Police are following lines of inquiry after an alleged robbery at Julian’s Berry Farm in Huna Road, Whakatane.

Police received several calls shortly before 1:30pm, after reports of a firearm being discharged towards the floor.

Two people were hit by pellets and were treated by ambulance at the scene for minor injuries.

The Armed Offenders Squad is attending.

Anyone with information or who witnessed what happened is asked to contact their local Police station, or Crimestoppers on 0800 555 111.