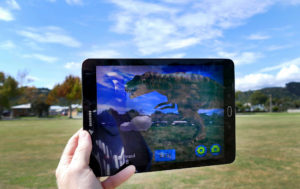 Parks Week runs from 4-12 March 2017 and is being marked with some fantastical additions to some of the Whakatāne District’s public spaces.

Warren Park in Whakatāne, Matatā Lagoon Reserve in Matatā and Edgecumbe Domain will all be turned into digital fantasy playgrounds with the ‘Magical Park’ mobile app for two weeks, starting on Saturday 4 March, and locals and visitors are invited to come along and experience some great new technology.

The Magical Park app was created in New Zealand and blends a virtual world with an existing park; where users get to interact and explore a fantasy world where they have to herd kittens, run away from a bad fairy or come face to face with a giant T-Rex – all in a local park, using a smart phone or tablet.

Parks Week is promoted by the New Zealand Recreation Association, whose chief executive Andrew Leslie says he is looking forward to seeing Magical Parks springing up throughout New Zealand.

“We believe combining outdoor play with technology can motivate kids to get off the couch and be more physically active,” he says. “We can’t reverse the effects of technology, and nor should we try. What we can do is create healthy relationships with technology by using the screen to get kids outdoors and moving around. Kids love playing mobile games outside, because they get to run around and have fun in a really engaging way.”

Whakatāne District Council Public Affairs Officer, Richard Parfitt, says the magical Parks app is easy to install and use, and although there are some technical requirements, the majority of mobile devices will be compatible.

“It pays to download the ‘Magic Parks’ app from the Google Play or App Store before heading to the park. If your device is missing a required component, you’ll see a ‘not compatible’ message then,” he says. “To play at a Magical Park, you’ll need GPS turned on and access to mobile data. Each game uses only a small amount of data, around 50kb, so you don’t need to worry about data-usage. Head to your nearest Magical Park, read the signage, head into the play area, turn on the app and follow the instructions from there. We’ve been ‘testing it’ and its lots of fun!”