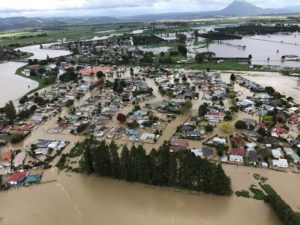 A recent paper presented to Bay of Plenty Regional Council provided some perspective on the size of the side-by-side storm events that struck the Bay of Plenty in April this year.

The report notes that, going in to April, the Bay of Plenty region had experienced a very wet month of March with rainfall of 1.5 – 5 times historical recorded monthly normal levels. Soil moisture levels during March were higher than long term averages and had approached or exceeded soil saturation levels.

The first event, ex-Cyclone Debbie, was responsible for a large amount of rain over the entire region with record rainfall resulting in unprecedented lake/river levels and flows across the region.

Around a week later, Cyclone Cook made landfall in the Bay of Plenty and subjected the region to high winds and high seas resulting in considerable damage. During Cyclone Cook, the report shows a short but significant burst of extreme wind gusts and wave heights.

Chris Ingle, Regional Council’s General Manager, Integrated Catchments said that the report provided an insight into the weather that had battered the region last month.

“Our Data Services team has a network of around 130 automated monitoring stations throughout the region and they collect a huge amount of valuable environmental data.

“This data provided invaluable insight during the events and again, now post-event, to help us understand how these events looked alongside long term trends and averages. It was a valuable to be able to provide this perspective to Council and the wider public,” Mr Ingle said.

The most significant damage from ex-cyclone Debbie was the breach of the stopbank at Edgecumbe causing wide-spread evacuations and damage to the township.

Both storms, in particular ex-cyclone Debbie, are the backdrop to a number of planned reviews likely to be announced over the coming weeks as organisations and the public look for answers to questions arising from these events.