Opotiki to star in Tauranga 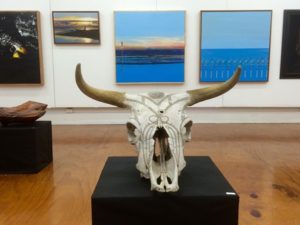 Following the success of The Real Opotiki exhibition at Toi Tu Studio One in Auckland, Opotiki art will continue its tour of the country with an exhibition in Tauranga later this month.

The Real Opotiki is a collection of art from new and emerging artists with strong connections to the Opotiki District. Opotiki Councillors, Lyn Riesterer and Shona Browne are both on the organising committee for The Real Opotiki and have helped bring the exhibition from concept to reality.

Cr Riesterer explained that the first show on Ponsonby Road was very popular and provided momentum to rollout what is becoming a ‘tour’ of other New Zealand cities.

“Auckland was a fantastic celebration of Opotiki’s nationally and internationally recognised artists and some incredibly talented emerging artists. We had a great response so we decided to pick up on that momentum and roll the exhibition out to other towns and cities.

“It is a two-fold win for us as it showcases the talent of Opotiki and is also a fundraiser for Te Tahuhu o te Rangi, the community space, research centre and library planned for the District,” Cr Riesterer said.

Artists are sending in their works and preparing to fill the central Tauranga location with artworks from traditional landscapes, sculpture, photography, jewellery, Maori Pihe Pihe and hand-woven kete.

The exhibition is open for a short period from 12th November 2016 in the Goddard Arcade off Devonport Road. A special opening evening will be held on 11 November. Councillor Shona Browne was particularly pleased to see that Auckland was just the beginning for The Real Opotiki.

“We are starting to consider ourselves a ‘travelling exhibition’ as we have invitations from other cities around New Zealand. The Real Opotiki is a great way to showcase our fantastic art and artists up and down the country and raise funds for a valuable community project at the same time,” Cr Browne said.