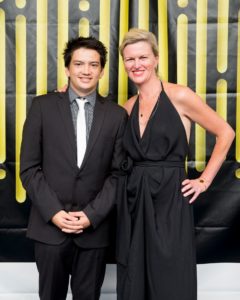 While it may have been a group of students from Nelson College claiming The Lion Foundation Young Enterprise (YES) Company of the Year title, it was an Opotiki College student who took the individual prize.

And on Tuesday night Mr Williams was awarded one of only four special prizes after Quick Coders joined 23 other regional winners at the Young Enterprise National Awards in Wellington.

Each of the regional winners were given the opportunity to pitch their business to a national judging panel that included leading CEO’s, company directors and venture capitalists.

Quick Coders created flash cards and an app to help students, particularly those from low decile schools, to learn code, which they taught in primary schools.

“I was absolutely blown away by the calibre of student groups at the finals,” Mr Casey said. “And, in a room full of dignitaries including the Governor General and the Deputy Prime Minister, the Opotiki group shone.

“The Quick Coders had a captive audience in Bill English for part of the evening after being, I believe, the only school to engage him in conversation and have a photo taken with him.”

Mr Casey said he was impressed with Mr English and the time he took to spend with the students.

“It was also great to see Teariki gain one of the special awards. He more than deserved the accolade.”

Young Enterprise students won 18 awards at the national final, with over $20,000 in cash prizes and $30,000 in scholarships announced as well.