One dead after Ruatahuna crash 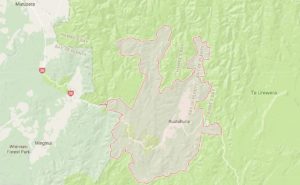 Police have confirmed a person has died following a fatal crash on Ruatahuna Rd, Ruatahuna.

Police were called at 11.55pm Sunday night and were told a van had gone over a bank.

A woman was found to be deceased at the scene.

The driver and four children, who were also in the vehicle, were uninjured.

The name and age of the deceased will not be released until next of kin have been informed.

The Serious Crash Unit is investigating.