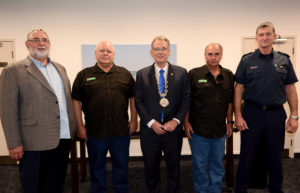 A ceremony honouring local volunteer firefighters has also marked the ushering in of a new era for emergency response.

The ceremony, held in the Whakatāne District Council Civic Centre on 28 June, saw Mayor Tony Bonne recognise members of the Waimana and Whakatāne Rural Fire Forces with awards and offer thanks for their ongoing commitment to the community. “Volunteers are integral to New Zealand communities, and their commitment goes above and beyond the call of duty to include the many hours of training they put in,” Mr Bonne said. “Our whole District is indebted to the dedication of our firefighters, and on behalf of us all I extend sincere thanks.”

Mr Bonne also noted that the ceremony signaled the end of an era, with all local rural Fire Services – which have up until now been organised under the auspices of the Whakatāne District Council – merging with the New Zealand Fire Service on 1 July to become Fire and Emergency New Zealand.

Kevin Cowper of the New Zealand Fire Service said that the public would see little change as a result of the merger. “In this part of the country, we already have a great, solid working relationship with our rural service colleagues and we are looking forward to reinforcing that and working together with them in the future,” he said. “The public know that when they call, we respond, and this merger will only strengthen our ability to do that.”

Mr Cowper reiterated Mr Bonne’s praise for local fire service staff, acknowledging the long service of many members and also welcoming newer members to the fold. “At the same time, I’d also like to recognise the families of our firefighters, who are a part of the commitment and know the trials and tribulations of emergency response. Without their support, our firefighters could not commit the time needed to do their jobs to such a high standard.”