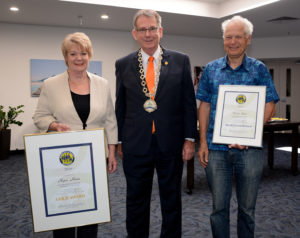 Myra Moon was presented with the national Member of the Year Award, and Kelvin Deal with a Long Service Award, by Neighbourhood Support New Zealand in a ceremony at the Whakatāne Civic Centre on Monday 21 November.

In presenting the awards, Mayor Tony Bonne thanked both recipents for their commitment to the community and thanked them for making the District a better place for all residents. “Myra and Kelvin are perfect examples of people who strive to support the communities in which they live,” Mr Bonne said. “As Mayor, I feel a great sense of pride that we have such outstanding people in community, and I thank you for all your efforts.”