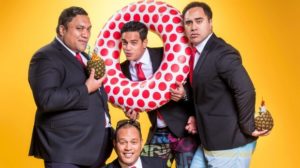 With the show band’s long-awaited debut original album, ‘That’s Us!’ being released Friday 15th September Modern Māori Quartet will head off on an extensive 20 date nationwide tour, travelling the highways and byways of New Zealand taking their music to the people of Aotearoa.

Matu Ngaropo says: “The tour will be about taking our music to the people and returning it to our roots. We want to inspire a new generation of garage parties and fuel those special gatherings with new, honest, hearty waiata to add to the classic playlist. These will be songs that the heartland of Aotearoa can sing along to. As a team committed to carrying the mantle of this kaupapa we aim to share a new and current sound of Māori showbands and show people that real music, our music, is alive and thriving.”

Former Whakatane local boy and performer, Fran Kora added,  “The Past, present and future, with Aroha and truth as the main ingredients.”

Tickets on sale Mon 7th Aug at 9am
For show and ticketing info go to modernmaoriquartet.nz