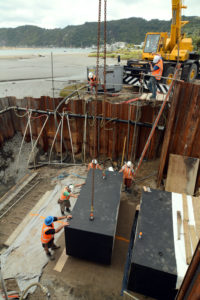 A major upgrade to the McAlister stormwater pump station has reached its first milestone with the installation of the last four sections of a box culvert which will allow stormwater from the Apanui catchment to gravity-drain through the Whakatāne River stopbank.

Thirteen three-metre wide concrete culvert sections, each weighing seven tonnes, have been installed through the stopbank and will convey stormwater to the river when the tide or river flow conditions are favourable.

Once the outlet structure is completed on the river side, the adjacent stop bank will be reconstructed and work will move on to the second stage of the upgrade, which includes modifications to the existing pump station structure and the installation of three new semi-submersible pumps.

Each pump will be able to discharge almost 2000 litres per second, a 60 percent increase in capacity over the existing pumps. The inlet to the pump station from the canal will also be widened from 7m to 12m to accommodate additional flow.

“This has been a major undertaking, working in a difficult environment,” he says. “When it is completed, the upgrade will significantly improve stormwater drainage from low-lying, northern areas of the town and greatly reduce surface flooding impacts on properties and the roading network.”