My vision has never changed. It always comes back to creating jobs ­ it always has done right from the time I was elected. I want to have a vibrant community that always has jobs for people. 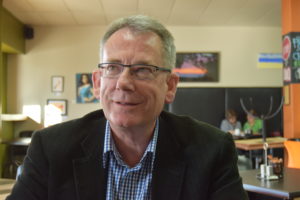 How does the community know you best?
Through  my community work I think. I’ve dedicated years of my life to community organisations including Rotary and Coastguard. And from my time in the retail and health food sectors.

What do you have to offer the district?
My skills of leadership and my uniqueness in leadership style. Throughout my life I have chaired many boards, both commercial and non­profit, and in all the years I’ve chaired meetings, I’ve always had a united board or council. And for a mayor, that’s a pretty hard thing to say because you generally have one or two detractors who often oppose things. We do debate around the table but we’ve got a unique system, we work like a commercial board and just get on with it. And people can see we’ve had some pretty close debates ­ fluoride being one of them.

Why should people vote for you as opposed to other candidates?
Easy: experience. And established relationships. From my existing experience on council, the day that I’m elected I’m working, whereas a new candidate would have to spend three years getting to know how to do things. That’s reality ­ if you talk to anybody in local government they’ll tell you that. And the biggest, most important thing in life, I say, is relationships. The first three years of being mayor are spent establishing relationships with individuals, organisations, government departments. Now I’m up there and running. I can walk into most Wellington offices and they know who I am.

What is your vision for the Eastern Bay and how do we achieve it?
My vision has never changed. It always comes back to creating jobs ­ it always has done right from the time I was elected. I want to have a vibrant community that always has jobs for people. We know people leave the district, we’re not trying to stop that, but if people want to stay here in the Eastern Bay, we want them to have job opportunities. And there’s many ways to do that. There’s tourism, business establishments, and currently we’re going through residential growth which creates more jobs, so things are going along really well at the moment, we just have to keep them going.

What are we currently doing right / and what are we doing wrong?
I have to say we’re doing a lot of things right. First of all, council works as a governance group very, very well. We’ve employed a great chief executive and I have an exceptional relationship with him. It doesn’t matter who the Mayor is, the Mayor and CEO relationship is vital for the district to move forward. I think we’re doing everything in balance. I’d like to say we could do things faster but it’s all done within the means of finance. One thing that frustrates me, and I’ve always said the day I’m not frustrated is the day I need to get out of politics, is how long things take to get done. A council is a different animal, it’s not a private company where you can just say I’m going to do it and forget about the consequences. We’ve got to communicate with the public, we’ve got to make sure they’re on board and, particularly in our district with 45 percent Maori population, we must work with iwi and have good relationships to move forward. Things we haven’t done well? I plan next term to further our iwi partnerships and to work together with all iwi. During a recent conversation with kaumatua Joe Mason, I said one thing I want to be able to say at the end of a third term, if re­elected, is we (council) can walk together with Ngati Awa. And we can still take the council to another level of customer service. We’ve gone a long way but there are still areas with bureaucracy ­ but we have made huge progress.

Where do you think we should be in ten years ­ a tourist or agriculture­based economy?
We need to be both. This district has never been focused on one industry and that is the beauty of the Eastern Bay of Plenty. When one industry is down, we’re not down. We’ve just gone through the dairy downturn, Waikato have been annihilated but dairy farming is only part of us. We’ve got timber, we’ve got tourism. Tourism does have to come up, but we don’t want to be in a situation where we rely on one industry. How should we be cooperating with our neighbouring districts? Exactly what we’re doing now. We’ve got a joint committee that I instigated which has been in place for three years now (The Eastern Bay of Plenty Joint Committee), plus we have informal Bay of Plenty Mayoral get­togethers ­ we’re doing things well.

Do we have anything to learn from Tauranga and Rotorua?
There’s always things to learn from other places. They’ve got growth problems in Tauranga. We’re never going to have those same growth problems here but once we’ve got this land at Piripai online and Barney Gray’s land is available, we’re going to satisfy the residential growth here for a period. So I don’t think people need to panic, we’re not going to be like Tauranga. With Rotorua being such a tourism area, we can learn from them. We are working on a tourism strategy that encompasses the entire Bay of Plenty.

Where do you stand on a Piripai development?
Where I’ve always stood, it has to go ahead. I was involved in the Piripai development back in the 90s. When I was Mayor the last time, we had a subdivision proposal and we had an agreement with Ngati Awa, it was all go. But it fell apart sometime after I lost the election. As I understand it, it did so because of some internal politics. Since then and under another Mayor, there was a developer signed up but it didn’t go ahead then either as the developer went broke on another venture. Council purchased the land from the Whakatane Board Mills in the 70s I believe, so it has been in private ownership for many years. So, as always, I am 100 percent behind the Piripai development. It’s been through the Environment Court and has been re­established as residential land. I’m sensitive to the urupa trustees, the Environment Court has made a ruling we must do a management plan and consult with the trustees, which we are presently trying to do. The development is important for the future and it’s the only land large enough for a retirement/lifestyle village.

Where do you stand on a second bridge?
It’s essential we get a second bridge and route into Whakatane. I’ve already taken it up with NZTA and have initial interest and an agreement saying yes we need to work on it. People need to realise this community cannot afford a second bridge. But we can afford a second bridge if NZTA is on board and the bridge is part of a route into the town. The decision is made based on congestion and we currently have 22,000 vehicles going across the bridge every day ­ which is high ­ the Pekatahi Bridge has 2500 a day. The way it works is we have a long­term plan for our council. The Bay of Plenty Transport Committee also have a long term plan that is reviewed every three years. So, to get funding from NZTA, you’ve almost got to be in the Bay of Plenty Plan, which has to be agreed to by all of the Mayors. I believe I can get it into the next plan, I’m quite certain of that, but that’s for the planning stage. They’ll spend hundreds of thousands just investigating and planning. I have already brought it up with them and said we need to do this now. It’s not a crisis at the moment but it will become a crisis once Piripai is developed. If everything over there was developed tomorrow, that’s another 500 sections. 500 X 2 cars and we will have a crisis, and that has been agreed. We will get the second bridge proposal into the Bay of Plenty Transport Long Term Plan.

Do you believe we have a housing shortage ­ both low cost and retirement? How do we solve this? Yes we have. I believe we have a mini housing crisis and that’s why it’s essential this land becomes available. And, we need a lifestyle village, I don’t know how many people have told me we must have a village to stop people leaving the district.

Is council red tape hindering growth?
I would have to say yes there is some red tape that hinders growth, but there is confusion between Government red tape and local government red tape. We’re doing the best to break down the red tape at our end and Government is trying to reform the local resource management act. The best example is, we have spent $3.2million on the wastewater scheme at Matata, and we’ve got nowhere. And that’s been eaten up through resource consents and through environment court. So, we are caught up in red tape just like everyone else, so you have to think yes there is still some red tape. Some of it is the way staff interpret the rules from Government, but we cannot blatantly ignore rules either.

Should Council look at external funding sources to help economic growth?
Yes, but we’re very limited in what we can apply for. Currently it’s about 68 percent that comes from our rates, the rest is user charges. But under legislation, the only tool we’ve got is a land tax, or a capital value tax. The user charges, we go through a process every three years to determine what is community good, and what should be funded by the private person. The library for example, I think it’s 80 ­ 90 percent funded by the community, 10 percent is user charges. If we said we think the Library should be 100 percent funded by the users, it would close its doors tomorrow. Things like events bring in economic growth for the community but don’t bring in any money for council. If anything, they cost council to attract them here.

What do you think is the most underutilised asset Whakatane has?
White Island. We’ve actually started to address this. We’ve produced a paper and, if I’m re­elected, I will be setting up an Eastern Bay of Plenty Tourism Board. This is where council gets frustrated, not long ago we had a tourism meeting and, out of that, nothing happened. I’ve taken a delegation of people to Taupo to see how Taupo do it successfully, and we came back and nothing happened. There is a little bit of parochialism between councils but I’m going to set up this board regardless. We all have assets and opportunities that are underutilised and we should all work together to bring people here.