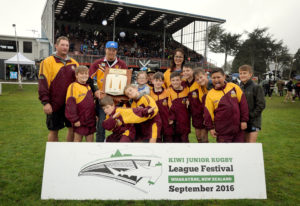 Junior rugby league teams from across the country are set to get a taste of Eastern Bay of Plenty hospitality when they arrive for the upcoming Kiwi Junior Rugby League Festival.

The festival, being held from 15-17 September, will see 33 teams hosted by marae throughout the district. Nicola Burgess, Events and Tourism Advisor for the Whakatane District Council, says the event offers a way to showcase the area’s unique culture and hospitality.

“We are very proud to be supporting this event, which brings a different group of visitors to the region’” she says. “The festival gives young players the opportunity to travel, maybe for the first time, and experience something completely new, especially if they come from the bigger centres. It’s very special, and something the kids will remember forever.”

“It provides such an authentic cultural experience, which people love. And in turn, local marae and businesses in smaller outlying towns will see real benefits from competitors, their families and supporters visiting for both events.”

As the Whakatāne events take shape, Global Games is also looking to the future, with plans for expansion on an international level. Negotiations are underway to form a partnership with the Portugal Rugby Youth Festival, Europe’s largest junior rugby event, which will become a sister festival to the New Zealand tournaments. Global Games’ relationships with Haka Tours in New Zealand and UK-based company My Tour, mean there will be more international teams attending future New Zealand events, as well as opportunities for local teams to travel overseas.

The Junior Rugby League Festival kicks off on Friday 15 September at Rugby Park in Whakatane.