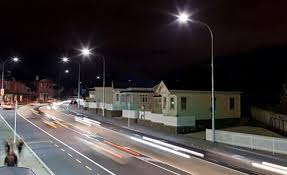 Streetlights throughout the Whakatāne District are to be converted to LED (light emitting diode) technology during the next 12 months, thanks to substantial funding from the NZ Transport Agency.

LED lighting units provide a brighter, better-focused light; are more resilient; use less energy; need less maintenance; and last up to six times longer (20-24 years) than a standard streetlight. Those advantages mean that LED light units pay for themselves in 10-15 years, while energy use and maintenance gains across the District-wide streetlight network should generate close to $2 million in additional cost savings during their lifespan.

Some 400 of the District’s 2500 streetlights already have LED fittings and the Transport Agency has confirmed that it will meet 85 percent of the $2 million cost of installing LED units in the remaining 2100 lights. The District’s $300,000 share of the project cost has been budgeted in the current Long Term Plan.

Installation of the new lights will begin in Murupara within the next few weeks, to tie-in with supply and switching improvements planned in the township. Work in other rural communities will follow, with installations in Whakatāne and Ōhope to be undertaken before the end of the 2017/18 year.

“This is a great example of central and local government working together and utilising advanced technology to deliver an improved service which, at the end of the day, will save everybody money,” he says.

“LED street lights come on instantly, last much longer and are shock and vibration-proof, so we understand why councils are seeing them as better options for communities,” she says.

Other advantages of the new streetlights include a Wi-Fi based central management system, which allows all lights to be controlled from a central point, and automatic fault notifications, eliminating the need for programmed inspections. Light intensities can also be dimmed during low use periods, or increased around event venues as required.