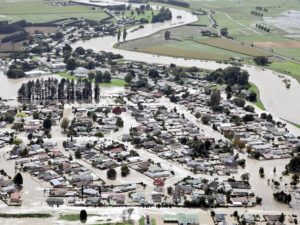 The Liveable Homes project team is working with community funding agencies, the construction industry, NAVA, and other project partners to get people who do not have the means required to repair their flood-damaged properties back into their homes. Primarily this involves uninsured, or under-insured homes, many of which are in Edgecumbe.

In April, the Regional Council committed $700,000 towards supporting people affected by the eastern Bay of Plenty flood event. An initial $200,000 was provided for the set up and operation of Whakatane District Council’s Recovery Office to allow recovery efforts to start immediately. The remaining $500,000 was set aside for flood-affected residents and at its June meeting, the Regional Council agreed that those funds should be utilised through the Liveable Homes Project.

“Liveable Homes is directly targeted at people whose properties were impacted by the April floods, both in Edgecumbe and other parts of the Whakatane District. The Council agreed that this project would be best-placed to allocate funding where the needs are greatest,” said Doug Leeder, Regional Council Chair.

BayTrust Chief Executive Alastair Rhodes says that healthy, sustainable housing is one of the key funding priorities to help achieve the Trust’s vision of making the Bay of Plenty the greatest place to be.

“Edgecumbe and Eastern Bay communities have been badly affected by the April floods and BayTrust is glad to be able to help at this time. Having a warm and healthy home to return to will make a massive difference to families that have already suffered real financial and emotional hardship.”

These two contributions will provide a significant boost to the Project, which is already making a difference by ensuring that residents can return to warmer and healthier homes.

“From the start, Liveable Homes’ aim was to ensure that no-one was left behind because they didn’t have the means to repair their homes to a habitable standard,” they say. “The Eastern Bay Energy Trust’s $200,000 contribution meant that we were able to address the insulation needs of flood-affected residential properties and with this fantastic support from BayTrust and the Regional Council, we can look forward to delivering some significant benefits for people whose homes were impacted by the April floods.”

Any flood-affected Whakatane District residents who want to know if they are eligible for assistance with building repairs or free insulation through the Liveable Homes programme are asked to contact the Council (tel. 306 0500), ring the Liveable Homes coordinator on 027 565 3898, or call in to Te Tari Awhina at the Edgecumbe Library.