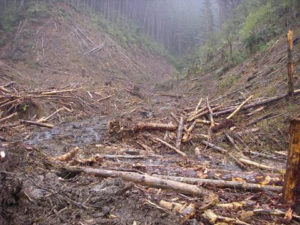 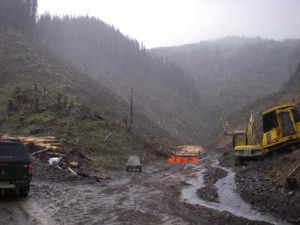 A forest owner and harvesting company responsible for a 197 hectare pine forest in steep mountainous terrain south-east of Ōpōtiki have received a hefty fine for their environmental offending. The charges relate to disturbance of stream beds and discharging sediment, trees and forestry debris into streams. Whitikau Holdings Limited, the forest owner, pleaded guilty to five charges of contravening the Resource Management Act 1991 and was fined $57,000. The harvesting contractors, Paturakau Limited and Neville Walker, also pleaded guilty, and were fined $4,000 and $3,000 respectively.

In her decision, Judge Harland concluded that the  offending effectively destroyed the beds of two streams for a period.

The defendants “caused large amounts of sediment, bark and slash to be mobilised and discharged to the downstream receiving courses, including the Whitikau Stream, and would have killed any aquatic life in the streambed or forced it to retreat”.  It’s estimated the stream will tale “at least 5 – 10 years” to recover, says Judge Harland.

The resource consent to harvest the forestry block, was granted to Whitikau Limited in 2014. Shortly after harvesting commenced in June 2015, Regional Council received a complaint by a member of the public, who was concerned about the impact of the construction of a ford  on native eel and duck populations. The council officer who investigated the complaint identified a number of concerns, which were subsequently addressed by Whitikau.

Subsequent council inspections continued to identify compliance issues at the site. This culminated at an inspection in October 2016, where a compliance officer noticed one of the tributary streams flowing through the forest was particularly muddy.

The officer investigated further and found logging machines working directly in the waterway, vehicles hauling logs through the stream, and logs deposited on the streambed to allow machinery to drive through the stream. Furthermore, there was a significant volume of slash and debris in the streams. These were significant breaches of both resource consent conditions and the Resource Management Act, which resulted in an abatement notices being issued that required Whitikau Holdings to cease its unlawful activities at the forest.

Unfortunately, follow-up inspections throughout late 2016 found that, while there was some improvement, the harvesting operation was still non-compliant with both the resource consent and the abatement notice.

“Consent holders are required to consider the effects of their resource use on the environment and their community, and to reduce any significant effects. The conditions included in a resource consent are specifically designed to avoid, remedy or mitigate any adverse effects on the environment; in this instance, from forestry harvesting in steep and difficult terrain, which carries a higher level of risk.” he says.

“In this case there was a clear disregard for the environment, with heavy machinery operated in and near streams, logs dragged through streams and tracks cut through areas that didn’t hold and ended up in the water.” he says.

“The really disappointing thing is that Whitikau had identified environmental risks at the forest and committed to managing these risks in their consent application.  Furthermore, the rules and requirements were reiterated a number of times throughout the council inspection process, but Whitikau still failed to provide adequate infrastructure and controls for the job to be carried out in a suitable way”, says Mr Miller.

“Whitikau Holdings was obliged to comply with the conditions of the resource consent. If there were difficulties with the infrastructure to the extent that conditions were breached then its options were to either cease the harvesting operation or ensure necessary infrastructure was provided,” she says.

The stream nearest the operation is Whitikau Stream and this ultimately flows into the Mōtū River. Short jawed kokopu and whio (blue duck) have been recorded in the stream and koaro in a tributary to that stream.

In her decision Judge Harland also considered the issue of insurance for fines for environmental offences.