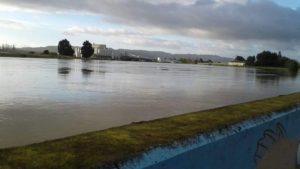 Most Eastern Bay rivers have returned to below warning levels and the Rangitāiki is receding, but floodwaters continue to come through the breach on College Road in Edgecumbe. The regional council has put rock armouring and toe loading in several at-risk areas. These have now stabilised and there have been no stop bank failures under prolonged elevated flood levels from an overdesign flood.

“As waters lower, we’ll be able to better assess the breach and we may be able to fill the gap as a temporary measure on the weekend,” flood manager Peter Blackwood says.

This was an unprecedented event. “Ex-cyclone Debbie rainfall levels were very high – on the Rangitāiki, sites logged between 200-320mm in 48 hours,” Peter says.

Stop banks in the Eastern Bay are designed for a one-in-100 year event. At their peak, river flows were more than 30 percent larger than this.

TrustPower started lowering the levels in Matahina Lake from Monday lunch time – well before the predicted rainfall. Bay of Plenty Regional Council activated its Whakatāne flood room at midday on Wednesday and its experienced flood managers and their teams have worked round the clock since then to minimise flood damage and protect communities.

The flood management plan for the Matahina Dam is designed to take 100 m3/s off the flood peak.

“We exceeded this by taking off 110 cumecs per second. If we hadn’t used the storage in Matahina dam, 12 percent more water would have flowed down the river at the peak of the flood,” Peter says.

“Tough decisions were made well and our data shows that those have paid off.”

River and stop bank inspections by Bay of Plenty Regional Council staff continue today. The Rangitaiki River flow has reduced to 420 cumecs per second, down from more than 700 cumecs yesterday.