Whakatōhea Mussels Ltd has harvested their first commercial load of mussels for the domestic market, including supermarkets throughout the North Island today. 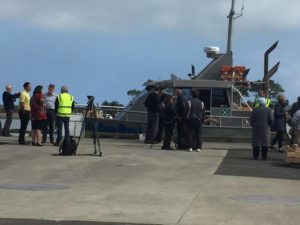 Whakatōhea Mussels Ltd has harvested their first commercial load of mussels for the domestic market, including supermarkets throughout the North Island today.

These mussels have been raised in the Eastern Bay of Plenty and represent the very first commercial harvest of shellfish from the Eastern Seafarms Ltd water space situated eight kilometers off the Ōpōtiki coast.

The boat, North Quest, arrived in Whakatane this morning with the first load of mussels destined for supermarkets across the country. A karakia  was held earlier this morning at the mussel farm before harvesting began.

These mussels, from the Eastern Bay of Plenty, will be available through New World and Pak’n’Save supermarkets as well as at Ōpōtiki Seafoods Ltd on Wednesday and Thursday – as long as their stocks last!

Chairman  of the Whakatōhea Māori Trust Board Robert Edwards,  said after seventeen years, realised the beginning of their dream of “Being the Food Bowl that feeds the World”.

“it has been a long road, with many potholes, but our resolve and determination has seen us through to this day. We will be here for generations to come, providing food for the world – as well as other value added products!”