Feedback to be sought on boat ramp fees proposal 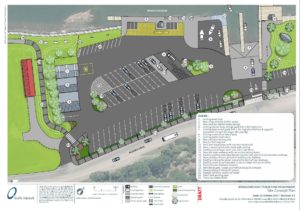 Caption: Pictured is the concept plan for improvements at the Whakatāne boat ramp trailer park.

The Whakatane District Council’s Projects and Services Committee has agreed to consult with the community on proposals to introduce boat ramp fees for all District ramps, and to upgrade the Whakatane trailer boat park. Public submissions on both proposals will be sought early next year as part of the consultation process for the 2018/19 fees and charges schedule and 2018-28 Long Term Plan (LTP).

Reporting to the Committee last week, Manager Capital Projects Jim Finlay said the Council’s existing funding policy was that 70 percent of ports and harbour service costs should be met by the Harbour Fund, with 30 percent covered by private use fees and charges. The private benefit component of ports and harbour services and facilities’ annual costs was estimated to be close to $282,000, while current income from berth fees and other charges was $151,000 a year.

“That is around $131,000 short of the income target set out in the funding policy and one obvious way of closing the gap would be to introduce a boat ramp fee,” he said.

Mr Finlay estimated that a fee based on an annual permit ($90), two-week permit ($35) and casual one-day permit ($5) system would generate income in the order of $78,000 a year. If introduced, permits would available online, from Council offices and potentially from other retail outlets. Monitoring and enforcement by way of infringement notices would be undertaken by Council parking staff, the Senior Maritime Officer and Volunteer Coastguard appointees. He noted that such a system would have to be supported by the Whakatane Coastguard and Whakatane Fishing Club if it was to be implemented.

Council elected members expressed mixed views about the proposal, with a number of Councillors supporting the concept of a contribution to ongoing harbour costs such as channel dredging and ramp maintenance. While aware of a similar fee system for ramp use on Lake Taupo, they also noted that no other Bay of Plenty local authority charges ramp fees.

Mr Finlay said the concept plan for an upgrading of the Whakatane trailer boat park had resulted from requests by users of the parking area, port structures and the wider community. Service improvements offered included better and longer-lasting sealed areas; better-defined trailer and car-only parking areas; restricted access to loading areas on the wharf frontage; redirected public thoroughfare to improve health and safety factors; a shelter for waka ama craft; improved boat lift-out capacity for 100 tonne lifts; and general aesthetic improvements. Boat, trailer and navigation aids storage (for which an annual rental would be charged) would also be provided for the Bay of Plenty Regional Council’s maritime equipment.

The estimated cost of the upgrading was $600,000, to be funded from Harbour Fund reserves.