Explore the raw power of White Island with Google 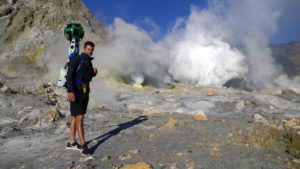 Known to Māori as Whakaari, White Island is one of the world’s most accessible, continuously active marine volcanoes.

The island’s awe inspiring landscape attracts sightseers from all over the world, fueling a tourism boom for Whakatāne, the ‘gateway to Whakaari’. Now a project between the Whakatāne District Council and Google is aiming to take that accessibility to a whole new level, by bringing the raw power of White Island / Whakaari online with Google Street View.

The project was the first of its kind in New Zealand, with Google loaning a ‘Trekker’ to a third-party organisation to capture Street View imagery. People can now explore White Island with Google Street View alongside some of the World’s great wonders; the Pyramids of Giza; The Grand Canyon; and Mt Everest to name a few.

White Island is not the only local attraction to now feature on Google Street View, armed with a Google Street View Trekker – an 18kilogram, 15 camera backpack that takes high-quality 360° photos every 2.5 seconds, a team of local trekkers set out over summer to capture 35 kilometres of the Whakatāne District’s most iconic walks and landmarks.

The result is an immersive experience that will give prospective tourists a taste of what the Whakatāne District has to offer, including Moutohorā Island sanctuary, home to endangered species, such as kiwi, tuatara, saddleback, kakariki and native geckos. You can also take a virtual hike on Ngā Tapuwae o Toi, a walkway that captures the essence of the Whakatāne District. The track features pā sites of major historic significance, spectacular pohutukawa stands and sublime coastal views. It also passes through the Ōhope Scenic Reserve, home to a thriving kiwi population.

“There was some discussion around whether putting footage online would mean people would choose not to do the real thing. Google Street View can’t fully replicate the real life experiences. White Island especially – standing on an active volcano, the smells, noise and scale of it is truly something best experienced in person.”

Matthew Jenke, Google New Zealand Special Collect Operations Lead, adds that giving people a taste through Google Street View is a brilliant way to capture their imagination and encourage them to explore further and travel to New Zealand.

“The Google Street View camera loan programme is bigger than that,” he says “Google Maps has over 1 billion monthly active users. People who may never have the opportunity to visit White Island will now be able to see it; Through Virtual reality teachers around the world are taking their classes on virtual expeditions to amazing places around the world. We’re excited to have White Island added to the list of experiences Google Street View provides.”