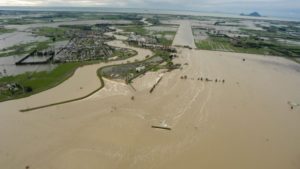 On 6 April 2017, a breach of the Rangitāiki River stopbank at College Road in Edgecumbe resulted in widespread flooding of properties and the evacuation of the entire township. Following that event, the Bay of Plenty Regional Council requested an independent review of the infrastructure and the circumstances that led to the breach of the flood wall and associated flooding. That Report was presented to Council and made public in October 2017.

A report earlier this month [subs. 1 March 2018] to Council’s Audit and Risk committee illustrated a coordinated response to the recommendations of Review (often called the Cullen Report).

Council’s General Manager Integrated Catchments, Chris Ingle, said that it was important that Council took a coordinated approach to the recommendations and was transparent in reporting progress.

“There are 29 recommendations in the Review Report and they cross a wide range of Council functions including different groups like Civil Defence, flood management, monitoring and data gathering, modelling, engineering, and community engagement. So we have set up an internal working group so we can coordinate that approach and keep track of the different pieces of work.

“Some of the projects are short term and some are much longer. It was helpful to lay the recommendations out for Council and illustrate progress to each,” Mr Ingle said.

Progress has already been made in a number of areas.

Work is well underway with Whakatāne District Council and Civil Defence agencies on the development of river level triggers and evacuation planning for the Edgecumbe township. These take into consideration the state of repair works along the River and extensive scenario modelling.

The Cullen report also made recommendations to bring forward changes earmarked in the long term plan for improvements to the monitoring network in the catchment. Several proposed sites already identified are in the process of being installed and Council is continuing to review the monitoring network in all Bay of Plenty catchments to ensure there is increased spatial coverage and redundancy through surrogate sites and modelling.

Management of Lake Matahina was the topic of one of the recommendations in the Report and Council is continuing to work closely with Trustpower to review the Lake Matahina Flood Management Plan to improve communications in flood events and agree protocols for timing and lake level management during an event.

A number of the technical and supporting recommendations have also been taken on board in the reconstruction work and planned upgrades of the College Road Stopbank  and Rangitaiki Floodway infrastructure.

“In addition to the technical recommendations, the Review had several recommendations around long term strategies and design philosophies. This covered a bit of ground including a growing need to ‘make way for our rivers’ and future ‘soft engineering’ solutions and how we deal with the changes already happening and the impact of climate change. We have underway, since 2013, a couple of key projects that look at these strategies within and outside our river schemes in the Bay.

“It is also worth noting that the Review found that parts of the community did not understand the flood risk that they live with. We recognise that this community education will be a growing part of what we do in the future,” Mr Ingle said.

The full report including a table cross-referencing the Cullen Review recommendations is available on the website here.