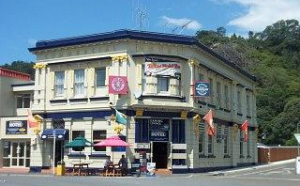 One of Whakatāne’s most well-known buildings is set to go on the market later this year, as Bay of Plenty Regional Council announces plans to sell the Commercial Hotel.

Before being sold however, the 1939 art deco portion of the site, which is earthquake-prone and derelict, will be levelled. Then the entire site, including the historic 1917 corner hotel, will be resurveyed and sold.

Both buildings are currently owned by Bay of Plenty Regional Council. It acquired the properties in 2003 when its Whakatāne office was at maximum capacity and it was looking at options for staff accommodation. More recently, the corner hotel has been leased while the 1939 building has remained vacant.

The Regional Council’s Property Manager, Annabel Chappell, said a key reason for the demolition of the 1939 Hotel was to ensure the preservation of the historic corner public bar.

“Currently the 1939 building is an earthquake and fire risk and we would not want anything to occur which could see the town lose a valuable piece of history, in the corner pub. Although we are conscious that the 1939 hotel holds a special place in many people’s memories, it has no real heritage value.”

Heritage New Zealand has issued an authority for the demolition work.

Ms Chappell said the Regional Council has been working with Whakatāne District Council on the future plans for the site, and has donated some of the interior fittings which may have some historic value to the Whakatāne Museum.

“We want to ensure the sites are resurveyed and marketed in a way that encourages a development that’s complementary to the community’s vision for the future of the Whakatāne CBD.”

“We have had a number of enquiries about potential development sites in the CBD and we’ll be working with the Regional Council and its agents to ensure that the future development of this highly strategic location contributes to the achievement of our town centre plan,” she said.

Demolition is expected to take place in June.