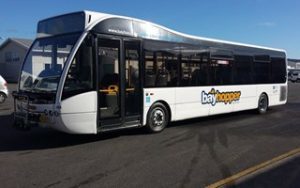 Bus fares on all Bay of Plenty public transport services will rise five (5) percent from Monday next week, affecting Bayhopper Tauranga, Cityride Rotorua and all rural services such as Bayhopper Eastern BOP.

Starting from Monday, 9 January 2017, fares will rise to ensure a greater balance between user contributions and public funding, in accordance with the Region’s Public Transport Policy.

The increase equates to around a 5 to 20 cents per trip increase depending on whether users use the Smartride card entitling them to a discounted fare or pay the cash fare price.