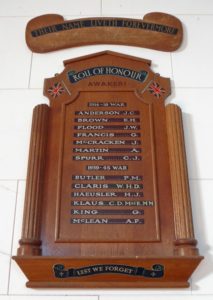 Awakeri residents have been asked to express their views about a preferred location for the area’s World War I and II Roll of Honour, and whether they would like a permanent memorial in a public space.

Whakatāne District Council Community Services General Manager Mike Naude says there’s no immediate need to move the Roll of Honour from the former War Memorial Hall, but if there is a general consensus that it should be relocated, the Council is happy to undertake the necessary ceremony.

“There is a range of possible options that could be considered,” he says. “The new owner of the hall is happy for the Roll of Honour to remain in place, or we could move it to another community facility, such as the Awakeri School, the Awakeri Event Centre or the nearby Edgecumbe War Memorial Hall.”

He says it is also possible to have a permanent memorial structure erected in one of the community’s reserve spaces. “That could involve a small cenotaph-like structure, or a ceremonial plaque mounted in a suitable location, preferably in a Council reserve such as the area surrounding the Awakeri Event Centre.”

Any Awakeri residents who would like to register their preferred course of action are asked to email the Council’s public inbox (info@whakatane.govt.nz); make a submission in writing to the Chief Executive, Whakatāne District Council, Private Bag 1002, Whakatāne 3158; or post their response to the news item on the Council’s Facebook page (Fb.com/WhakataneDistrictCouncil/).