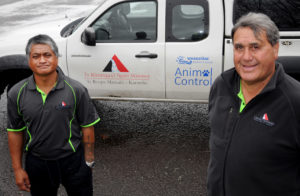 The partnership agreement which saw Ngāti Manawa assume responsibility for animal control in Murupara has been hailed a huge success.

Since Whakatāne District Council reached an agreement with Ngāti Manawa in January 2017, local animal control officers Ned Howden and Rua Te Pairi have been patrolling the area and the results have been overwhelmingly positive. “This has proven to be a really positive partnership, and the impact of having these two locals involved is emphasised by the acceptance of the community when people are approached in regard to dogs, abandoned vehicles or even overgrown sections,” says Graeme Lewer, Manager Community Regulation at Whakatāne District Council, “and the boys also came through a recent SPCA audit of the pound with flying colours.”

Mr Lewer says that since the new arrangement has been in effect there has been a roughly 25% increase in the number of dogs impounded. “And that is a good thing – that means there are less dogs roaming the streets and the message is getting out to the public that they need to be responsible pet owners or they will be fined. As this message sinks in, I firmly believe that we will see the number of impounds begin to drop.”

Ned Howden said that the two control officers had received very positive feedback from the community, and had a good working relationship with locals. “People are happy to give us a wave and help us out and let us know if there are any dogs on the loose, and we are happy to see the numbers of dogs roaming the streets going down. As much as possible we are just trying to get the message out there that owners have to be responsible if we are going to have a safer community.”