My vision for the Eastern Bay is to make it the most livable place in New Zealand. Let me give you two examples. We’ve got to stimulate economic growth to help bring out the huge potential I see in young people, particularly business skills 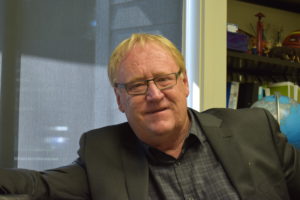 How does the community know you best?
As Principal of Whakatane Intermediate. A position I have held for the past 18 years.

What do you have to offer the district?
My biggest strength is experienced leadership. I’ve always led 50 to 70 staff. Other strengths are my knowledge of bureaucracy at the highest level, and my knowledge of business and finance. I understand young people and I also have experience as a peacemaker with all age groups. And I’m a little crazy most of the time, I think that’s important!

Why should people vote for you as opposed to the other candidates?
I’ve had a lot of life experience, and that includes living within diverse communities. I’ve also had a lot of experience with leadership in those communities. The school principal is often, especially in rural communities, a leader of the community. You have responsibilities to bring everyone together. I don’t just talk about things, I actually do them. In Coromandel I initiated a sports complex and swimming pool projects, and we built them. When I look around me here, I take satisfaction in knowing we’ve almost, but not quite entirely, re­built the Intermediate since I’ve been there. I’ve created the Environmental Science Unit ­ I like to think of myself as an environmentalist. I understand farming, and was brought up in a farming area, so I understand rural life. I also spent 13 years living in Auckland. I’ve lived in Taihape, I’ve lived in the South Island. And I know what it’s like to be part of a team. Whether leading a school staff team or coaching a rugby team ­ I have experience in both.

What is your vision for the Eastern Bay / how do we achieve this?
My vision for the Eastern Bay is to make it the most livable place in New Zealand. Let me give you two examples. We’ve got to stimulate economic growth to help bring out the huge potential I see in young people, particularly business skills. Young people don’t need to work in the cities anymore, they can open up their own online businesses here. We need to make them welcome ­ we need to support them. Council has the power and influence to resolve what I se as real conflict between recreational fishing and commercial fishing in local waters and trawling, for example, inside Whale Island. I don’t believe we have room for both if we’re looking at long­term sustainability for our fish stocks. There’s been research that suggests fish do not move outside a 50 km diameter in their life span ­ so you can fish them out. I think that, as part of making Whakatane the most livable place, we need to focus on recreational fishing which is a billion dollar industry. Recreational fishing could bring a lot of tourism and wealth to the town, but it’s not going to happen if there’s no fish.

What are we currently doing right / what we are doing wrong?
I think there is a proper focus on looking after the environment. We have the new recycling bins. I was impressed recently to see the organic waste being turned into compost. We need to develop more walkways and cycleways and that’s on its way. I think the Strand could become an exceptional place and there’s been some progress there for shopping. When I fly from Whakatane to Auckland, which I do a lot, I’m always disappointed by the land devastation. The only forest that’s healthy is in the Kaimais ­ that I can see from the air ­ and I think we need to do a lot of replanting. And I think when you replant, and I’m also talking about river banks and fence lines, it’s amazing how the bird life comes back very quickly. However, I do believe there are transparency issues within Council. There has been a bit of an outcry recently about the tendering process and issues around the openness of it ­ we have local contractors saying they do not have any knowledge of the tenders until they have been awarded to outside businesses. I have also spoken to builders who say they have difficulty with council’s consent timeframes and costings.

Where do you think we should be in ten years ­ a tourist or agriculture­based economy?
We can have both. We are certainly both now. We have great sunshine hours, we’ve got great soil and we’ve got good rainfall. And tourism ­ we’ve got amazing things. We’ve got beaches, bush walks, White Island. When you talk to people overseas they’re always interested in White Island ­ people seem to be fascinated by volcanoes. We need to be equipped to host major events. As President of the New Zealand Association of Intermediate and Middle Schools, I have had a wonderful opportunity this year to showcase the Eastern Bay. The AIMS conference was suggested to me, which is unusual as they normally hold it in a major city. So I’m really excited about hosting it here. There are Australians coming as well as people from throughout New Zealand and I’m confident it will bring big money into the economy. And if people like the town they’ll come back and bring their families.

How should we be co­operating with our neighbouring districts?
We’ve got no choice but to cooperate with both. Let me give you an example. Right now Opotiki is steaming ahead with aquaculture plans and, I believe that could be massive for the region. There’s an ongoing effect from aquaculture in the sense that it generates service industries, for example manufacturing the ropes, the muslin socks, the plastic buoys. Also there’s a lot of engineering work, transport work and even a factory could spring up for value added ­ chilli mussels, smoked mussels, something like that. It’s not just aquaculture, there’s all sorts of things we should be doing collaboratively.

Do we have anything to learn from Tauranga and Rotorua?
We could learn about how to market our tourism through Rotorua ­ they do it very well. We’re heartland Maori in the Eastern Bay and I think that’s a huge tourist attraction in itself. People are fascinated by the Maori culture. And I think that now there are so many cruise ships going in Tauranga, we need to work out why the tourists aren’t coming here. It’s only an hour away with the arterial link. I’ve been on a cruise ship in the Mediterranean and when we docked, we just got on buses and went. But they don’t come here. We have to market ourselves as a destination place.

Where do you stand on a Piripai development?
I think we’ve got to be careful with it because all the people involved need to be on the same page, and they’re not. I think there’s still a lot of negotiation, a lot of talking, a lot of sorting it out, to go. I’m not 100 percent convinced we need a traditional retirement village ­ I’m for what people want. And I’m hearing from a lot of elderly local people, that they want to stay independent in their own homes, but they want to be supported in doing this. They want to be able to buy into maybe a cluster of houses and support each other but be close to medical facilities. I need to talk to our older people and see what they want. But if we do go ahead with a village, I think the campground is the best suggested site.

Where do you stand on a second bridge?
We have to have a second bridge. Agriculture and horticulture continues to grow with us, Opotiki and the East Coast. Also we need another bridge because, if our one bridge was out of action through a natural disaster, we’d be in a lot of trouble. Access out of our area relying on one two­lane bridge is a big risk. I’d like to see a bike bridge more toward Coastlands in the first instance but, as far as the positioning of a second bridge goes, I think we’d have to first see where the population grows before making any firm decisions. And also, where it can be and is it practical to connect it to a road network.

Do you believe we have a housing shortage ­ both low cost and retirement? How do we solve this? The shrinking amount of affordable housing is our key issue, since we can’t rely on developers alone to address that shortage. Council has a role to play as landowner, funder, planning agency and community leader. Is council red tape hindering economic growth? From what I’m told it is. Councils are not traditionally user friendly to business development. We definitely need to make sure we are encouraging and enabling as opposed to making things harder.

Should council look at external funding sources to help economic growth?
This council is very rates dependent. It does need to look further afield to ease the burden on ratepayers. I think we also need to look to try and attract big events here. I know, through my involvement with AIIMS New Zealand and the AIMS Tournament, there is an opportunity for a cash injection into the economy with events and conferences. We have to think outside the square to bring more money into Whakatane. What do you think is the most underutilised asset Whakatane has? I believe it is the people. If I was Mayor one of the things I would do would be to make sure the best and the most passionate people are in the roles that ensure Whakatane is the most livable place.  I’ve always been part of really strong teams, I’d like to think I had a hand in forming those teams, that set out to achieve the best outcomes. I also think we have so many talented youngsters in Whakatane. Many of them, I believe, don’t go on to reach their potential. Maybe we don’t have the facilities here for them to get to that highest level or maybe we are not doing enough to support them to reach that top level. Listening to the community, from young to old, is vital and something I feel strongly about.

Is it time for a change or are we better to stick with what we know?
People say to me, to be Mayor you need to be on council for three years. I don’t want to be a councilor for three years. I want to go in as leader with a comparatively blank canvas, and have fun doing it. We’ll do it our way ­ not necessarily the traditional way. When I go into a new school I actively don’t want to know what my predecessor has done. I set up my own management systems, my own way of doing things that suits me. I can’t operate under someone else’s structure because it doesn’t suit my leadership style and it doesn’t suit my personality. Elected officials have a governance role, I support delegation to sub­committees, otherwise it loads too much on one person. People with particular strengths can lead those subcommittees. They’ve got all the ideas and, rather than be accountable to me, they can be accountable to the leaders of the sub committees. I want to tap into other people’s knowledge and skills ­ because they will make me look good!